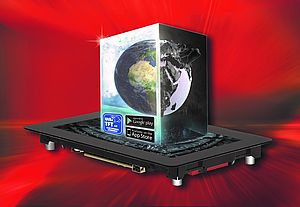 ELECTRONIC ASSEMBLY is using augmented reality (AR) to bring its new uniTFT display module to the attention of potential users. The free app provides an unprecedented means of displaying in-depth information on what is probably the most innovative display module in the world. It is based on the print advert that is to appear as part of an advertising campaign across a large range of media for the uniTFT but is also available for downloading on the website.Point the camera of a smartphone or tablet at the advert and the module comes alive, and at the same time a short humorous film is launched on the display module! With the aid of a 3D model, the app also provides valuable information on this new 5" screen.The use of augmented reality is becoming increasingly widespread for enriching visual representations of any object with additional computer-generated information directly on the screen. ELECTRONIC ASSEMBLY provides a wealth of information for the uniTFT via the augmented reality app that enables customers to explore the full potential of this advanced touchscreen unit. Among the many functions, a number of videos are available for users of the app to discover more about its performance and options as a control unit. The videos explain to users how to program an entry screen with the display module, how to incorporate a keyboard, the range of settings the touch panel offers and how to feed in analog signals and create virtual measurement instruments on the screen. With the aid of a 3D model, the app also explains the complex components of the display module which range from PCAP, Sound and RTC as well as USB, I2C, SPI and RS-232 interfaces right through to a card slot for a micro SD memory card. The revolutionary uniTFT display module from ELECTRONIC ASSEMBLY is the first of its kind to offer the option of combining predefined objects on the screen, rotating them, zooming in on them and assigning attributes. The wide range of possibilities offered by this display module considerably increases the productivity of systems integrators and developers, since it allows developers to produce control elements and display tools graphically and to equip them with real functions. The app is available via Google Play for devices with an Android operating system, while iOS users can source it from the Apple App Store free of charge: